The Life of the Buddha. The London-based composer Glenn Keiles composed the film music for this 50-minute BBC documentary for the Aachen Obertonchor conducted by Wolfgang Saus in 2002. With a small group we recorded the choir part in a single day in St. Gereon in Giesenkirchen. Participants: Britta Blisniewski, Ellen Kreft, Helga and Wolfhard Barke, Chris and Tim Ellis, Ralf Malzkorn (and I of course).

Glenn brought the production manager and all the equipment from England, just to fly on to South Africa the next day. He must have mixed the pre-recorded solos and instrumental parts during the flight, because already in the evening the master was ready to listen.

Since we did not have an overall impression of the piece in advance and did not know the film, it was an exciting work to record the phrases according to the composer’s very precise sound concepts. The overtones were partly notated. In some cases there was room for improvisation. The fundamental tones were always precisely written down.

The reactions of Glenn’s fellow composers in London were very interesting: they wanted to know how he programmed such a natural and lively sounding synthesizer sound. In 2003 overtone singing in chorus was still largely unknown to composers. 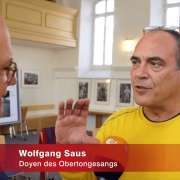 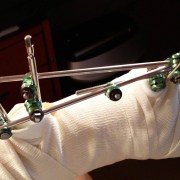