You are here: Home1 / Günther Beckers

In October 2014 the composer surprisingly sent me the link to this video. “Der Bootssteg” by Günther Beckers was my very first production with overtone singing in 1986. I hadn’t heard of it since then and, to be honest, I had even forgotten that I had already made music with overtones back then.

In 1983 I was on stage with Roberto Laneri for the project “Nada Brahma – Die Welt ist Klang” by Joachim Ernst Berendt. For the first time in my life I heard overtone singing and was deeply moved so that I immediately realized that overtones would change my life. I taught myself how to sing overtones with many experiments, without the slightest idea of how it worked, only from the memory of the sound, without the possibility to listen to recordings. And I couldn’t find out Roberto Laneri’s phone number. It’s amazing how contemporary the work still sounds today, then an experimental innovation.

→More about the composition

1986 was a year of extraordinary music projects for me. After an intensive with a professional ensemble in a master class of the Swedish exceptional choir leader and later successor of Eric Ericsons, Anders Eby, it became even clearer to me that the secret of professional choral sound lies in the overtones.

I had just received a solo contract at the Municipal Theatre Aachen for the premiere of the opera “Chimäre” by the Munich composer Hans-Jürgen von Bose and rehearsed the difficult score including polyphonic tape recordings. At that time I loved avant-garde and experimental music and was able to easily sight read scores, so that I rehearsed new music with much joy.

At the same time, Günther Beckers, painter and composer, approached me with his composition “Der Bootssteg – Hallkammer und schalltoter Raum” (“The jetty – reverberation chamber and anechoic chamber”). It was my part for overtone singing. It was played as a media production on the occasion of an exhibition at the Venice Biennale. In 1984 I had already worked with Günther Beckers and performed “Anna – ein neuer Mensch” (video), a co-production of Günther Beckers with Miki Meuser (no overtone singing yet). I found the project so exciting, because it fit exactly to my question about the sound secret of choral music.

Back then I had no idea if you could make purposeful music with overtones at all. My overtone technique was still uncertain. There were no teachers or I knew nobody except Laneri. In 1986 I had not yet heard of Michael Vetter or David Hykes. That was a challenge, because I studied chemistry at the same time and sang in six choirs and had rehearsals every day. Young and unstoppable when it came to sound. Except “young” not much has changed ;).

I am happy that this rarity has now emerged. 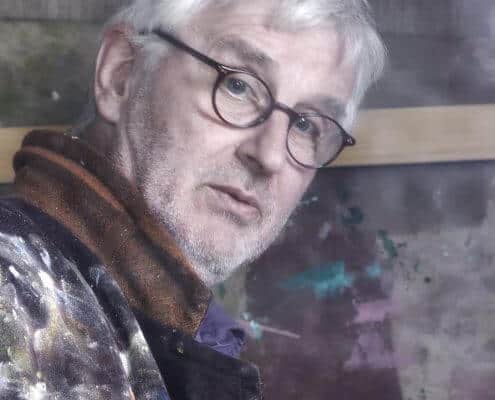