I was very happy about this video from Barnaby Martin. It is a wonderful introduction to the basics of my → Choral Phonetics. In this video he shows why formants are so important for intonation.

Choral phonetics uses our hidden ability to perceive resonances in the vocal tract as pitches (→ hearing test). And it trains a special fine motoricity of the tongue to control these resonances and to adapt the timbre to chords. This know-how enables singers to tune resonances just as precisely as their vocal tones. This turns timbre into a musical instrument. Choir sounds, as they can be heard in the video, become controllable.

What otherwise requires many years of experience and voice training for choristers can be achieved much faster with the knowledge of choral phonetics. Choir singers and conductors usually learn the necessary vocal techniques in just a few days and can develop them into a retrievable skill set within half a year. This refines not only intonation and homogeneity in the ensemble, but also the carrying capacity and lightness of the voice.

Besides, Barnaby Martin has a great talent to explain complex musical phenomena in a simple and entertaining way. Be sure to subscribe to his YouTube channel “Listening In”, there are a lot of first-class videos about the effects of musical sounds.Among other things I recommend his video about the completely crazy intonation movements that Jacob Collier uses in his choir pieces. Guys, choral phonetics is slowly becoming mainstream :)!

This hearing test (it takes only 3:20 minutes) opens your hearing to a second listening level that is perceived by only about 5% of the musicians: The perception of overtones. This ability is essential for learning overtone singing. And it is a prerequisite for the practical implementation of singing phonetic and choral phonetics.

At the university hospital Heidelberg Dr. Peter Schneider and his working group found in 2004 that people perceive sounds differently, according to which half of the brain processes the sound. They developed the Heidelberg hearing test to find out whether someone perceives fundamental tones or overtones in a sound. →Here you can take the Heidelberg test

My hearing test is different. It tests whether someone recognizes more vowels or overtones in a sound. In the second part, it teaches how to shift the threshold between vowel and overtone perception in favor of overtones.

Listen to the first sound sample in a relaxed way. I sing a series of meaningless syllables on a single note. If you recognize a classic melody in it, then congratulations, you have a pronounced overtone hearing and belong to the 5% of people who have this perception spontaneously.

If you can’t hear the tune, don’t worry. At the end of the hearing test you will hear the overtones.

In the following sound examples, I will extract more and more sound information from the voice, which is interpreted by the brain as part of speech. Next, I sing the syllables by changing only the 2nd vocal formant. I hold the first one in a lower position, motionless. The syllables then only contain /ʉ/ sounds, the melody becomes clearer for some now.

If the tune’s clear now, congratulations. Here the melody is heard by 20-30%. Maybe you just suspect the melody and don’t know if you’re just imagining it. Trust the imagination. Your hearing picks up the melody. Only a filter in your consciousness says that the information is not important. Speech recognition is much more important.

I want to reveal the melody at this point: it is “Ode to Joy” by Ludwig van Beethoven’s 9th Symphony. In the next example I whistle it tonelessly. Thus your brain will learn better what to listen to. Listen to sound sample 3 and then to sound sample 2 afterwards.

Does it work better? If not, listen to the next sample.

In sound sample 4 I leave out the consonants. Now the Broca Centre, the brain region for speech recognition, has nothing left to do and passes the hearing attention on to other regions.

Now about 60-80% hear the melody clearly. If you don’t hear the melody here, you are probably classified as a fundamental listener in the Heidelberg test. This has nothing to do with musicality. You are in the company of some of the best flutists, percussionists and pianists.

In the next example I completely alienate the sound. I lower the third formant by two octaves with a special tongue position until it has the same frequency as the second. This results in a double resonance, which does not occur in the German language.

The technique is called overtone singing. The ear now lacks information from the familiar voice sound, and individual partial tones become so loud due to the double resonance that the brain separates the sounds and communicates them to the consciousness as two separate tones.

You will probably hear a flute-like melody together with the voice now. Overtone singing is an acoustic illusion. Because in reality you hear more than 70 partials. Physical reality and perception seldom coincide.

In the last example I walk the whole way backwards to the beginning. Try to keep the focus on the melody all the time. Listen to sound sample 6 more often, it trains the overtone hearing and makes you feel safer in the perception of the sound details.

Our reality is created within ourselves. And it can be changed. 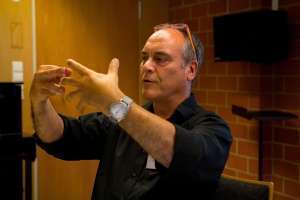