On ConcertHotels you will find a test that measures your precision of rhythm feeling. Take the test first. Then try singing overtones while you’re doing the test and write your results in the comment below if you like. I look forward to it. 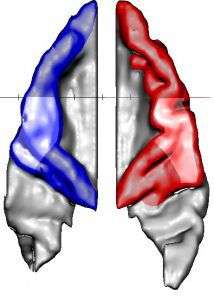 Is that one of the reasons? An interesting question that has not yet been examined. I suspect that focusing on overtones, at least for the untrained, draws attention away from rhythm.

In my advanced courses, I experience that at first the intonation and sound quality of the keynote suffers when the focus goes entirely to the overtones. Conversely, concentrating on the keynote causes a poorer overtone quality or even complete loss of control of overtone singing. I can immediately recognize from the sound what a student is concentrating on.

If you want to sing polyphonic overtones, i. e. a fundamental melody and an independent overtone melody at the same time, then both tones must receive equal attention. I have developed special exercises for this purpose, which improve the clean control of both notes after a few hours. It would be interesting to examine whether these exercises have an effect on the feeling of rhythm. I will do the rhythm test in my courses as a before-and-after comparison. I’m curious to see what happens.

What are your experiences with rhythm and overtones?

Do now also the new hearing test by Wolfgang Saus!

Go to the new hearing test

The effect of overtones in the brain seems to be of great interest. That’s why I would like to introduce the corresponding hearing test here. Dr. Schneider, the head of the study, provides on his website a hearing test developed by him, with which I have been testing my Masterclass students for years in order to develop an individual and optimal learning strategy for everyone.

This short test plays a series of tone pairs in which you are asked to decide spontaneously whether the second sound feels higher or lower than the first. At the end you get an evaluation of the degree to which you are fundamental or overtone listener, i. e. whether your hearing processes the sound more in the left brain half (fundamental listener) or more in the right brain half (overtone listener). If you are interested in the background of the work of the Heidelberg researchers, you can download the specialist article here.

Why One Plays Violin and the Other Cello

First published at Universitätsklinikum Heidelberg on 21.08.2005 (Repost with kind permission)

→ Here you can do the Heidelberg listening test yourself

The same sounds can be perceived very differently by different people. The cause resides in the brain. Because the sound of a tone depends on structures in the cerebrum: Those who hear more overtones and thus rather long-lasting, deep sounds have more neuronal cell substance in the hearing centre of the right cerebral cortex, the so-called Heschl’s gyrus (transverse temporal gyrus). Those who hear the root more strongly or prefer short, sharp tones show this characteristic in the left half of the brain.

These are the results of a study published on August 21, 2005 as an online publication of “Nature Neurosciences” and in the September print edition . Scientists from the Department of Biomagnetism at the Neurological University Hospital in Heidelberg, together with colleagues from the Universities of Liverpool, Southampton and Maastricht, examined a total of 420 people, the majority of whom were music students and orchestra musicians.

Extensive listening tests were used to determine whether the test persons belonged to the group of “fundamental listeners” or “overtone listeners“. (For each natural tone, a multitude of higher tones are produced in addition to the fundamental tone, which determines the pitch. These overtones complement the frequency spectrum of a tone and give it its individual timbre.) In 87 subjects from both groups, additional brain structures were visualized in the magnetic resonance tomogram and their functions were measured with magnetoencephalography (MEG). MEG is a very sensitive method for measuring brain activity. It measures low magnetic fields generated by active nerve cells in the cerebral cortex. 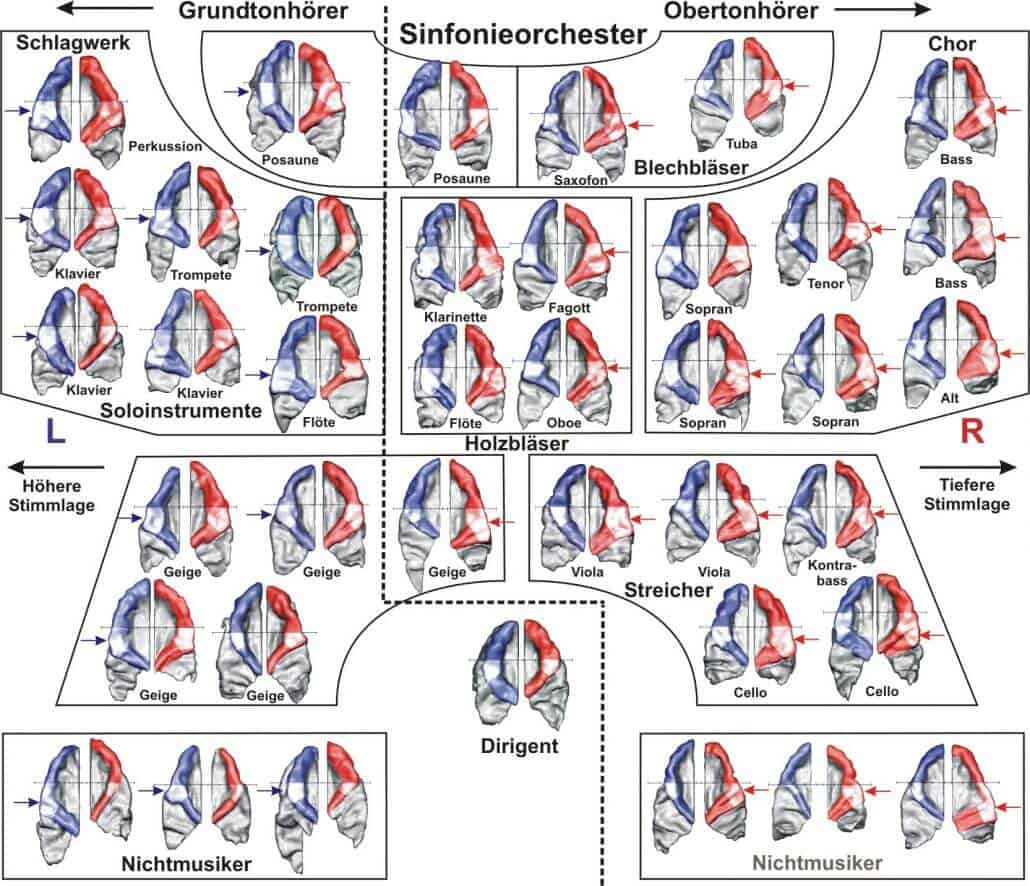 Overtone and fundamental pitch listeners in the orchestra (c) Neurological University Hospital Heidelberg
The Heidelberg study has shown that the seating arrangement in a modern symphony orchestra follows the individual ability of sound perception, which is anchored in the left or right hemisphere of the brain. Fundamental listeners with high instruments (e.g. violin, flute, trumpet) are located to the left of the conductor and overtone listeners (e.g. viola, cello, double bass, bassoon, tuba) to the right. Image source: Neurological University Hospital Heidelberg

“These two types of hearing also exist among non-musical people,” explains Dr. Peter Schneider, physicist, church musician and MEG specialist in the Heidelberg research group. However, the processing of music is also linked to the ability to hear the fundamental or overtones.

“Overtone listeners can perceive long-lasting sounds and tones better,” says Schneider. This ability is located in the right hearing center. The fundamental listeners, on the other hand, stood out due to a more virtuoso playing technique and better processing of complex rhythms, which is linked to the faster processing in the left hearing centre.

Singers and cellists are “overtone listeners”.

Musicality has nothing to do with the types of hearing, but it can also be found in the brain structures. In a publication in August 2002, again in “Nature Neuroscience”, Dr. Schneider and his colleagues from Heidelberg have already discovered that professional musicians have more than twice as much brain mass in the primary hearing centre as non-musical people. In addition, as MEG measurements have shown, their brains react more strongly to sounds.

Further information on the Internet:

Sorry, no posts matched your criteria