Wolfgang Delnui studied rhythm at the Institut de Rythmique Jaques-Dalcroze de Belgique as well as composition and school music at the Conservatorium Maastricht.

His compositions have been performed at various national and international festivals such as Ars Musica (Brussels), The Saint-Petersburg Contemporary Music Center reMusik.org, Gaudeamus Muziekweek (Amsterdam), the Donaueschinger Musiktage (project: The Next Generation), the Meakusma Festival and the Ostbelgienfestival (Eupen, B).
With his work “Looptonen” he won the “Flutonicon” composition competition in Utrecht in 2004.
The publishing house Donemus-Publishing house of contemporary classical music published the scores of two of his works.

Besides his activity as a composer, Wolfgang Delnui is also active as a music teacher. In this context he published the book “Blitzschnelle Ideen mit Rhythmus und Musik” in 2015 at Ökotopia-Verlag (Münster). 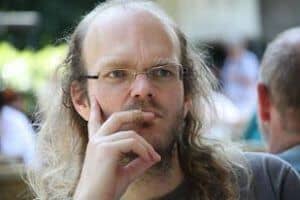 The project is a scenic composition for male overtone singer and electronics. In terms of content, the work deals with the current shift to the right in European politics.

In the current version, the auditorium is acoustically sounded by eight loudspeakers positioned around the audience. In addition there is a small loudspeaker next to the singer on stage. This loudspeaker is mounted on a microphone stand with a pop screen.

Musically, the composition is based on the “Ode to Joy” by Ludwig van Beethoven. The work starts with a genesis. Breathing, whispering and hissing open up the composition and prepare the basis for overtone singing and numerous other vocal techniques in a condensing sound space.

Communication exists only between the singer and the space. Gradually, the loudspeaker takes an increasingly important part on stage. It repeats passages that the singer has sung during his performance, feeding itself from his voice. At the latest from the moment it sings a duet with the singer, the stage loudspeaker is introduced as a person.

Speech fragments condense more and more and reveal more the right attitude of this person. Towards the end of the piece, the singer leaves the stage and leaves the space to the stage loudspeaker and thus to quotes from right-wing extremists and right-wing populist politicians.

In addition to the current social and political references, it is also the aim of the composition to develop new vocal techniques and apply them in an exemplary way in order to use the voice in musical theatre in a more varied and above all more differentiated way. Among other things, the composition demands the notated simultaneous control of two vocal resonance frequencies as well as transitions from noisy resonances to vocal formant melodies.

Symbolism flows into the work in various ways: