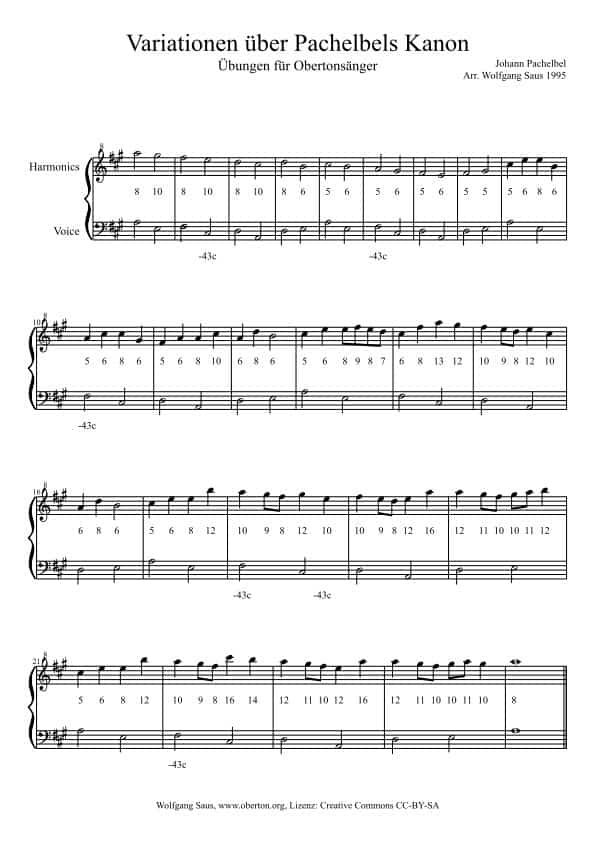 The most popular work of the Nuremberg composer Johann Pachelbel (1653-1706) (Wikipedia) and probably one of the best-known classical compositions ever. The canon is based on a harmonious ostinato, that a Chaconne bass figure with an overlying canon… the loop was already popular in the baroque period :).

The harmony sequence is repeatedly used across all musical genres. There are so many recordings, versions and adaptations of Pachelbel’s Canon (you can find more in the net, in German it is called Kanon) that already comedy numbers (video) have been written about it.

And I like to add my version for overtone singers, which I originally wrote as an exercise for polyphonic overtone singing. The bass ostinato is sung at the same time as the soprano melody. You can try two or three of you to sing the other violin parts as well.

By the way, as a special challenge I arranged a version for the ostinato together with Beethoven’s “Ode to Joy” (I will post later).

As always, I’m looking forward to comments, custom edits, video links or sound files, which I also like to publish here. You can also post links to your recordings in the commentary. For experts: Where do you have to trick in the score?