You are here: Home1 / Worth listening2 / Harmonics in The Golden Compass Film Score

Right at the beginning you hear flageolet glissandi of an electric cello (using chorus pedal) blending with overtone singing by Michael Ormiston and give mystical soundscapes, in which individual instruments are difficult to detect. Alexandre Desplat in an interview with mftm: “I love to blend sounds together so you can’t really tell what instrument it is.”

In the film, this sound symbolizes the freedom from the system control (Magisterium), which is represented by the main character Lyra together with the golden compass, which predicts the future and reveals the truth. A very striking association, because harmonics shift the perception into the right brain hemisphere, and thus beyond the control from outside. This is the film adaptation of the first volume of the phantasy trilogy “His Dark Materials” by Philip Pullman.

Perhaps for this reason the film was panned by critics (for alleged “anti-religion”), which meant that the other volumes of the trilogy were not filmed. I like this movie very much, I saw it several time and recommend it. 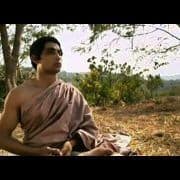 Aachen Overtone Choir in “The Life Of The Buddha” (BBC Documentary)